Spices and herbs have been cultivated and used for healing throughout the history of mankind.  In the lands of the Indian Ocean, cardamon, cinnamon, ginger, tumeric and pepper were used for healing purposes, and were known to other kingdoms of the world by the 1st and 2nd centuries.  Natural to Sri Lanka, these healing spices became highly valued and coveted by the civilized world, for flavor, food preservation, and restored health.

Sri Lanka is often called “The Pearl of the Indian Ocean,” for its natural beauty and biodiversity.  It is an island nation located in the Indian Ocean near the Indian subcontinent and possesses a tropical climate perfect for many forms of agriculture.  As a result, Sri Lanka became an integral part of the Spice Trade by the 7th Century, when Arab traders sought it out for cinnamon. Sri Lanka, then known as Ceylon, was colonized by the Portuguese, Dutch and English who exploited the natural richness of the island.  The world came to depend on spices from Sri Lanka to enhance their lives. 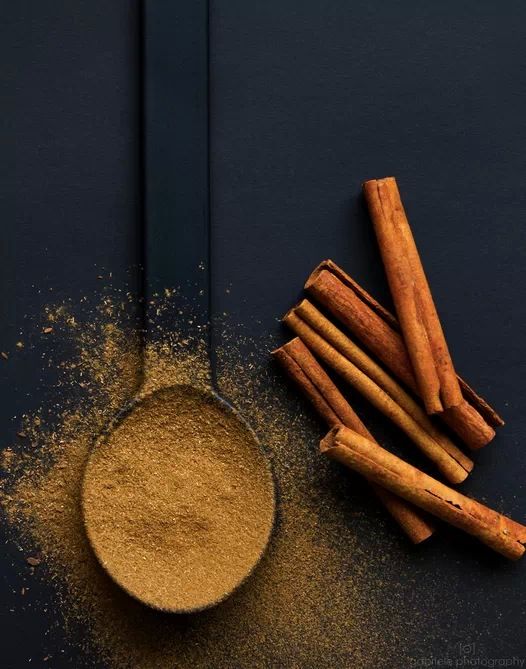 Ceylon true cinnamon is native to Sri Lanka and is produced by making shavings from the inner bark of the plant into tubes.  In ancient times, this source of cinnamon was protected by spice traders in order to preserve their monopoly. Indonesian rafts transported cinnamon to the Arabian peninsula, and from there it was exported to other regions of the world.

Cinnamon produces phenols, which made cinnamon highly valued for its ability to preserve meat.  Medieval physicians used cinnamon to cure bronchitis, and the early Egyptians used cinnamon in their embalming process.  Ceylon true cinnamon is known to be loaded with antioxidants, and it can help balance the LDL levels in the blood, balance sugar levels, and inhibit the growth of bacteria.

You can easily add more cinnamon to your diet by using it to complement foods such as sweet potatoes, granola, hot cocoa, muffins, oatmeal, smoothies, and of course, desserts.  It is versatile and can be combined with other spices, like nutmeg and ginger.

The spice known as black pepper has been traded throughout the world for millennia.  It is native to southern India and has been grown in Sri Lanka from an early date. Since its introduction to the world, it has become the most traded spice.

Black pepper is nutritious and provides us with vitamin K and magnesium along with other minerals, and actually helps absorb additional nutrients from other foods.  Because of its piperine, black pepper can increase brain function and has been used to treat depression. It has antioxidant and anti-inflammatory properties and speeds up metabolism in the human body.  Black pepper has been used to control tooth aches and arthritis, and to treat the emergence of gray hair.

The piperine found in black pepper is about 1% as hot as the capsaicin found in cayenne pepper. It has subtle heat and a woodsy aroma and is added universally to food to enhance flavor.  Black peppercorns and salt can be combined with cooking oil as a marinade for roasted meat. It is often used in conjunction with turmeric to enhance the benefits of that spice. Black pepper is best when whole peppercorns are milled just before use.

Cayenne pepper is named for its source, Cayenne in French Guiana, and is native to South America.  It is grown in Sri Lanka today, and is most often a combination of dried chilies. Cayenne pepper is ten times hotter than a jalapeño pepper.  It is hot.

Cultures consuming large amounts of Cayenne pepper have lower rates of cardiovascular disease, because it reduces blood cholesterol and triglyceride levels.  Cayenne pepper contains capsanthin and flavonoids which cause the brain to secrete endorphins.  Since metabolism is increased by the thermogenic quality of cayenne pepper, it can assist in weight loss, and better blood circulation.

To increase consumption, add cayenne pepper as a spice in cooking, and as a condiment to all seafoods, meats, and batters for fried foods such as chicken.  Try adding it to curries, stews, Texas chili and Mexican food. A little goes a long way, so if you are not a fan of cayenne pepper, you can still achieve the benefits by adding capsaicin in supplement form as a capsule or liquid tincture.

Nutmeg (pictured second from the left) actually contains two spices in one.  While nutmeg is produced from the seed of the tropical nutmeg tree, mace is derived from the outer covering of the seed. Nutmeg, a spice native to the spice islands of Indonesia, is grown in Sri Lanka and is valued for its fragrance as well as its flavor.

Nutmeg is beneficial to the digestive system.  Nutmeg oil is used to treat chronic inflammatory pain.  An old remedy for sleeplessness is warm milk flavored with nutmeg.  Nutmeg contains volatile oils which increases the levels of serotonin and dopamine, the feel-good stuff in our brains.

Nutmeg has a warm, sweet taste, and is familiar as a spice for eggnog.  It enhances the flavors of baked good and puddings, but is also added to sausage, meats, vegetables and sauces.  Try ground nutmeg on breakfast foods, such as scrambled eggs or a warm bowl of oatmeal. 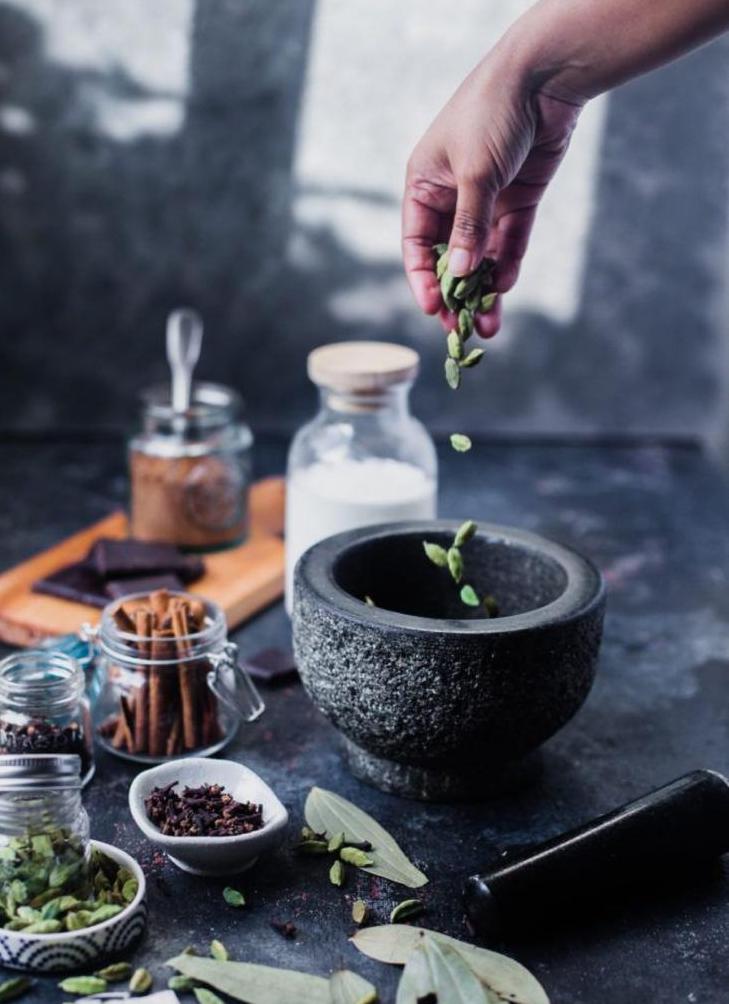 Green or black, whole or ground, Cardamom is prized as one of the most expensive spices.  Green cardamom is native to the Indian subcontinent and was introduced to Sri Lanka at an early date.  The Norsemen introduced this spice to Scandinavia about a thousand years ago, and it is a common ingredient in recipes there.

Cardamom has many health benefits due to its antioxidant and diuretic properties, which assist the body in controlling inflammation and lowering blood pressure.  It has been studied for its effects on controlling the growth of tumors. The essential oils natural to cardamom have shown a beneficial effect on some bacteria and seem to increase oxygen flow in the human body.

Highly aromatic, it has a strong, pungent flavor with a hint of sweetness.  Cardamom is used extensively in Indian and Middle Eastern cuisine, in both sweet and savory dishes.   To increase consumption, add this spice to meat dishes, baked goods and wines.

Ginger is a flowering plant whose root is used extensively in cooking.  It is native to the islands of southeast Asia, formerly known as the East Indies, and is a relative of turmeric and cardamom.  Ginger was carried by the island peoples to the region of India and Sri Lanka. It was deliberately cultivated by humans for its flavor and beneficial effects.

Ginger has long been known for its health benefits.  Phenolic compounds within the ginger root assist digestion and control nausea.  It has been shown to reduce inflammation and stabilize cholesterol in the blood. Ginger is diaphoretic, which means it controls body temperature from within, and is beneficial in the treatment of colds and flu.

The ginger root is processed as fresh, ground, candied, pickled or crystallized.  It is a pungent spice with some heat and is used in many forms in a wide variety of meat and vegetable dishes, spiced drinks and baked goods.  Add more ginger to you diet by drinking Ginger Tea. Peel and slice about two inches of fresh ginger root, add that to about 2 cups of water and boil 10 to 20 minutes.  Flavor with lemon and honey if desired.

Turmeric, or the Golden Spice, has been known to man for 4000 years.  It is the spice that gives curry is yellow color and is native to India and grown on Sri Lanka.  The spice known as turmeric is the root of the Curcuma plant.

The world’s people have used turmeric for its medicinal properties since the plant has been cultivated.  It contains a substance called curcumin, known for it powerful antioxidant and anti-inflammatory properties.  In its purest form, curcumin is used to control free radicals, and increase the growth of neurons in the brain.

Incorporate more turmeric into your diet by sprinkling it on vegetables before roasting, or add to rice, potatoes, scrambled eggs, and salad dressing.  Try Turmeric Tea and Golden Milk. 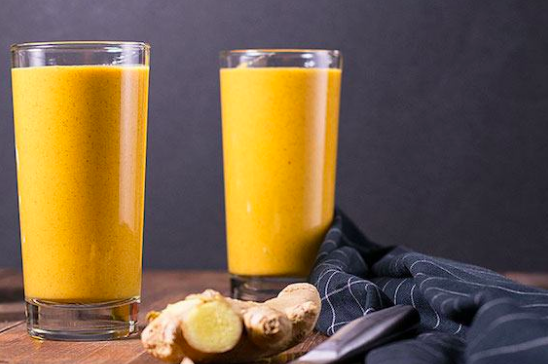 Add the healing spices of Sri Lanka to your lifestyle.  Here is a recipe for Pineapple Ginger Turmeric Smoothie as it appears on @robustrecipes, by Emily Koch, author of robustrecipes.com:

This smoothie is a refreshing version of golden milk. It’s sweet, tropical, ginger-y and warming from that turmeric. Plus it is packed with health benefits: aids in digestion, packed with vitamin c, anti-inflammatory properties, and healthy fats. So yum!

Serves: 1 large smoothie or 2 smaller ones

*Black pepper sounds like a strange ingredient but it helps our bodies absorb turmeric, don’t skip it.  Same with the health fats the flax seeds.

6 Coconut Smoothie Recipes You Must Try

Facebook Twitter Email Pinterest linkedin WhatsApp Telegram
Smoothies are vegetable magic!  The traditional smoothie is a thick, cold drink made from fruit and milk, and blended to...

END_OF_DOCUMENT_TOKEN_TO_BE_REPLACED

Facebook Twitter Email Pinterest linkedin WhatsApp Telegram
The coconut is a wild and crazy fruit!   It is a world traveler that is over 37 million years old, is found worldwide...

END_OF_DOCUMENT_TOKEN_TO_BE_REPLACED

Facebook Twitter Email Pinterest linkedin WhatsApp Telegram
The coconut is the Tree of Life in the Hindu religion.  It is a truly ancient food source for good health with many posi...